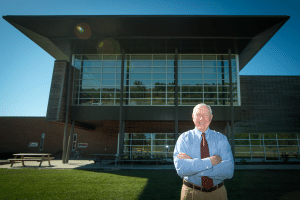 On Wednesday, December 5, 2018, founding Head of School Chuck Webster announced he will retire from the position at the end of the 2019-20 school year. Mr. Webster spoke to the student body during the morning’s community meeting while announcements were delivered via email to the University community. The announcement included letters from the Chairman of the University Board of Trustees and Mr. Webster. See the full text of the announcement below.

The Board of Trustees is committed to a smooth transition that will maintain the culture and signature programs that make University unique. A search committee will seek the best match for our culture to build on Chuck’s legacy, backed by the mission and core values, which continue to guide University.

A Letter from Jeff Lewis, Chairman of the University High School Board of Trustees

Dear University Families and Other Members of the University Community,

Twenty years ago, the founding members of the Board of University High School met Chuck and Nancy Webster. We were, to a person, completely wowed by the energy, passion, and commitment we saw. We knew at that time that we had found the leader of our school – which still only existed in our imaginations – who shared our values and had the experience and commitment to bring this dream to reality. Later we learned firsthand of Chuck’s imagination and compassion – and of his love for young people.

We have been honored and privileged to work with Chuck Webster as the founding Head of University High School. Chuck has announced to the board his plans to retire from that position at the end of the 2019-20 school year. While we are sad about the upcoming end of the “founder’s era” at University, we want to celebrate over 20 years of remarkable achievement and its profound impact on the community and its members!

Chuck has built a strong foundation on which University will grow and prosper in the years to come. The Board of Trustees has initiated a search process for Chuck’s successor, about which you will hear more in the coming weeks and months, and you will have opportunities to provide input in 2019. We thank Mike Klemsz and Marcy Bandick for spearheading the process.

Please join us in congratulating Chuck on the creation of Indiana’s best school, out of whole cloth, and in the celebration of these accomplishments over the next 18 months.

Jeff Lewis
Chairman of the Board of Trustees

A Letter from Chuck Webster, Head of School

Her name is Barbara Gilvar. She was the head search consultant hired by The Roeper School in 1997 to find my replacement after I had announced my departure, and she was hired by University’s Board to find their founding head. She was also the object of one of Nancy Webster’s best quotes, among many great ones. When I told Nancy that on Barbara Gilvar’s recommendation, I was driving to Indianapolis to meet with a group who were starting a school, Nancy said that she hoped that Barbara and I would be very happy together, because she wasn’t going. Well, she came, both of us drawn by a gracious, visionary Board and their aspirational mission to expand hearts and minds and to nurture excellence.

Continuity, culture, and innovation, along with a high tolerance for risk, a lack of signs of self-aggrandizement, and a determination to get to what matters most have all been touchstones of our school’s founding and development. There is real clarity about our purpose here, a frequently shared sense of joy in what is being accomplished, an inclusivity that defines us, and a civility that transcends place and time.

I have come to believe that the main lobby in Fairbanks Hall has become something like hallowed ground, emblematic of what is best about us. Before school students are drawn there, there is an easy familiarity, dynamic social groupings, and what seems sometimes like endless goodwill. And the earnest, hushed tones in the main lobby once classes begin, when staff and students collaborate, cajole, and occasionally comfort one another creates an intimacy around living and learning of which I am most proud.

I will be 72 years old when the next school year is completed, people are already gently finishing some of my sentences, and I frequently test Jennifer’s navigational resolve to keep me on track. It is time. I look forward to a great year and a half together and to stepping down in June of 2020. I have been pleased and touched by my conversations with Jeff Lewis, who will also step down as Board Chair in June of 2020. Jeff and former Board Chair Sandy Lange have been University’s Board leaders and my governance partners for 22 years. They are people and relationships that I cherish. And I have complete confidence in this Board to undertake a thoughtful approach to finding University’s new leader. As always, thank you to Nancy, whose constant support and unbridled enthusiasm for this work has made all the difference.