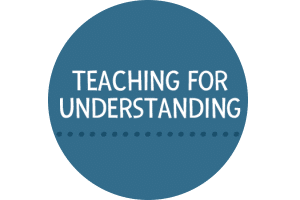 This semester, a group of University High School teachers got to be students too.

In collaboration with Project Zero, the Harvard Graduate School of Education offered a 13-week online course that asked teams of teachers to explore the Teaching for Understanding framework and apply it to their curriculum and classroom experiences. University High School enrolled a team of five teachers in the course — art teacher Tasha Barger, math teachers Erion Clark and Chris Morrison, and English teachers Kirstin Northenscold and Wes Priest.

The course included a one-week orientation and six two-week sessions that each focused on a specific aspect of Teaching for Understanding, from deciding what to teach to turning assessments into learning opportunities. At least once during each session, group members came together to discuss the readings and share their own experiences in the classroom.

“For me, the most valuable part of the class has been doing the readings and then getting together to discuss,” said Barger. “The conversations we’ve had as a unit have been really important.”

Each group also completed a project – to redesign a real curricular unit to fit the Teaching for Understanding framework. Barger, Clark, Morrison, Northenscold, and Priest each volunteered one of their units, but the group decided to focus on a statistics and probability unit from one of Morrison’s math classes.

“The unit project isn’t just a list of what we’re doing to teach statistics and probability, it’s also how we’re assessing students’ understanding of the material,” said Barger. “We created these performances, these ongoing assessments that we do with students through interactions, conversations, and dialogue, and I think those are really valuable.”

Developing the unit took several weeks. Throughout the process, the University group got feedback from their coach (one of the course’s facilitators) and suggestions from other school groups. They got to weigh in on other groups’ projects as well.

“There are four other teams [from places like Singapore, Australia, and Brazil],” said Morrison. “We got to look at how those teams constructed their units, comment on them, and use their ideas to help formulate ours.”

The feedback from the coach in particular helped the University group add structure to some of their assessments.

“When we started the unit, we came up with assessments that all involved just discussion,” said Northenscold. “We thought peers will talk to each other and get feedback based on that. Some of the feedback we got on that idea was that we needed to be more deliberate on what that would look like and to structure the peer feedback more [with a rubric or protocol]. I think that was really helpful.”

While some may question having English teachers and art teachers work on a math unit, the University group contends that in this case the content of the unit mattered less than the exercise. To them, the process of creating the unit was the point of the exercise.

“The unit is not something that the English teachers or art teacher are ever going to teach,” said Northenscold. “But it’s about going through this process. The process is educative in that way; by creating this unit together, it is teaching us to think about Teaching for Understanding.”

The Teaching for Understanding framework has already made its way into some University classes, and it is likely to continue to shape how these five teachers think about and approach their classes.

“This class got Tasha and I thinking about the Graphic Novels class [one of two new corequisite courses being offered in 2017-18], so we decided to offer it,” said Priest. “We will present that class using this framework, and we will document it as we go along.”

“It’s caused me to think about things differently too,” added Northenscold. “At times during this class we’ve had to talk to our students about the readings, so we’ll ask them questions, record their responses, and then reflect on what they said. They’ve been really, really thoughtful, and that has helped me rethink some of the teaching that I already do.”