For the third consecutive year, the University High School Academic Team has achieved an undefeated record in regular season matches. The varsity team earned a 14-0 record for the fall 2022 season. Since January 2020, the Trailblazers’ overall record is 44-1, including to 21-straight wins in league play. 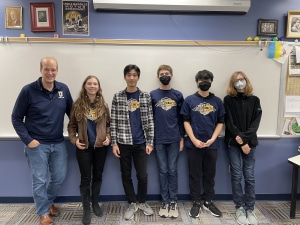 Chris Bradley, Academic Team coach and Dean of Academic Affairs, attributes striving for normalcy throughout the past few years as one of the elements of the team’s continued success.

“One of the ways was by keeping things as normal as possible through the pandemic. In 2020-2021, our hybrid year, we maintained the team and had regular practices,” said Bradley. “I attribute this to our overall school focus on community: helping each other out. The pandemic put a lot of stress on that and our school rose to the challenge.”

Bradley also credits the enthusiastic group of students who have participated in the Academic Team over the past several years. This season’s varsity team consists of senior and team captain Karl Wang, juniors Marie Coutant and Steven Zhang, and sophomores Mikey Cardwell and Lukas Fiur.

Team captain Karl Wang attributes a “balance” of knowledge and specialization between each of the team members as one of their greatest strengths.

“I think what’s unique about our team is that we have a great balance in that we have people who can cover all the categories. We respect each other’s knowledge and expertise,” said Wang. “Sometimes a history question will come up and I’ll have a hunch about it, but I’ll know Mikey’s pinpoint is history, so I’ll give him a couple seconds to see if he knows for sure.”

Sophomore Mikey Cardwell agrees with the sentiment of working as a team and trusting in the specialized knowledge of his teammates.

“If there’s a literature question and I have a hunch about it, I’ll look to Karl, first,” said Cardwell. “Lukas [Fiur] is great at miscellaneous and science, Steven [Zhang] is excellent at science, and Marie [Coutant] is a generalist and has good depth in literature.”

Looking back at their most memorable moments from this season, thus far, both Cardwell and Wang agree that the team’s final question win against Center Grove High School’s varsity team in the final round match-up of the Brownsburg “Dog Fight” Tournament was the most exciting–and nerve wracking–of the year. With Wang’s winning answer of “The Glass Menagerie” the Trailblazers secured a narrow 165-160 victory.

“During the Center Grove match, the adrenaline was definitely flowing. My heart was beating really fast and my hands were super cold. You’re kind of in that heightened state and sometimes it helps you recall things,” said Wang.“Obviously, getting the buzzer beater question to take home a trophy was really memorable. I’ve never been in a situation like that where I’ve gotten a question and it’s come down to one answer to win the whole tournament.”

As the team prepares for what’s ahead–the season playoffs for the White River Academic League–coaches Bradley and Jake Thurman will continue to simulate competitions in each of the team’s practices.

“While we try to have some levity in practices, they are competitive, as well. We rely on the older students speaking up, too, to explain norms of behavior that either help or hurt the team,” said Bradley. “The culture of the team is supportive, but also one of high expectations.”

In addition to an undefeated varsity season, the JV team was also unbeaten for all three matches they competed in. Coach and Dean of Student Affairs Jake Thurman credits the high performance of the JV team members for contributing to the achievements of both teams.

“It’s unfortunate that so many other teams didn’t have JVs of their own this year,” said Thurman. “We actually have one of the larger teams we’ve ever had. Despite the frustration and limited game time, those JV players show up to every practice and provide the varsity players with great competition. They are very much a part of the success of the varsity team.”

Great job on a third consecutive undefeated season for the University Academic Team! Looking ahead, the Trailblazers will compete in the season playoffs for the White River Academic League on Thursday, January 26. Following playoffs, the League will hold its annual tournament on Saturday, February 11, which will determine if the team qualifies for the state tournament in March.