For the second consecutive year, the University High School Academic Team won the Brownsburg High School “Dog Fight” Tournament. The Trailblazers defended their title and brought home the trophy on Saturday, Dec. 3 when they defeated Center Grove High School with a score of 165-160 in a nail-biting final round that included four lead changes and a last-second victory! 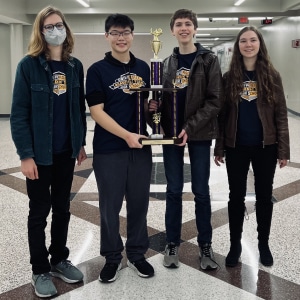 The varsity team consisted of senior and team captain Karl Wang, junior Marie Coutant, and sophomores Mikey Cardwell and Lukas Fiur. Following the morning matches, the team was 4-0 and scored 910 points, placing them as the #1 seed going into the afternoon knockout stage.

The final round match-up of the Trailblazers against Center Grove High School’s varsity team was a repeat from the finals of the previous year’s tournament. From start to finish, the match was a close back-and-forth between each team fighting for the lead.

With just four questions remaining, Center Grove held the lead at 135-160. On question 16, teams were given a short synopsis of a play by Oliver Goldsmith and asked to provide the title. With one second remaining on the timer, Karl Wang buzzed in and gave “She Stoops to Conquer” for the correct answer.

The Trailblazers were down 150-160 as the final question, worth 15 points, was read. Again, teams were provided a synopsis of a play and asked for the play’s name. With the winning answer of “The Glass Menagerie” the Trailblazers secured a 165-160 win with the varsity team achieving a 7-0 record and scoring 1,420 points throughout the tournament: Karl Wang (475), Mikey Cardwell (385), Lukas Fiur (195), and Marie Coutant (160). This year’s victory at the tournament marked the third in University’s history with the first win in 2014.

Fourteen high schools participated in this year’s tournament. Schools had the option of bringing multiple teams with four players each. Eight schools brought two teams. University was the only team to bring three teams, as well as contributing to a “mutt” team that consisted of two University students senior Saif Khatri and junior Jayden Seaton and two students from other schools. The team finished with 2 wins and 2 losses.

Check out the tournament records and points scored for the University “reserve” and JV teams:

Congratulations to all three of University’s teams and to Academic Team Coaches Chris Bradley and Jake Thurman! Next up for the Trailblazers is a match at Brebeuf Jesuit High School on Thursday, Dec. 8 at 4 p.m.