In addition to the annual department awards, Schmidt Award, and Core Values Awards, a new award was given at University High School’s Prize Day Ceremony on Friday, May 24, 2019. 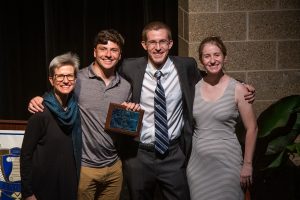 The award was the Scott L. Ray Excellence in Science and Mathematics Scholarship, and senior Ari Atlas was the inaugural recipient.

The scholarship was established this spring in memory of Scott L. Ray, a lifelong scientist and statistician. Ray served on University High School’s Board of Trustees for 12 years, and he is the father of alumni Abby (’07) and Jim (’10). The award is for a University High School senior who, like Scott, has a love and aptitude for science and math, as well as a passion for educating others in the fields. Atlas, as the first recipient, received $10,000 to use toward educational expenses.

Scott was a champion of education from a young age, particularly in science and mathematics. He relished educating others almost as much as he enjoyed the subjects themselves, and he was known to be a kind and encouraging mentor. Scott met people where they were and gave them the confidence to grow as students and human beings.