Chris Morrison Brings His Passion for Community Service to University

Chris Morrison, just out of college, was working as a lender at a large East Coast bank when his lifetime of service was kickstarted. Although he enjoyed sporadic engagements with community service in high school, he never could have guessed that a day-long volunteer position at the Boston Special Olympics would become a lifetime commitment.

Morrison and his team take a “silly photo” after a game

“It was a ton of fun,” Morrison recalls of that first encounter. “It spurred me on, that sense of giving back. I realized that for the Special Olympics athletes, it’s about the joy of playing, not necessarily of winning. It was just a blast to get to share in that joy.”

Since then, the joy of helping others has driven Morrison, who teaches math and serves as a coach for the boys soccer team, to lead countless service projects, fundraisers, drives and initiatives inside and outside of our school. University has had a decade-long volunteer presence at the Indiana Special Olympics and has raised thousands for it at the annual Polar Plunge thanks to his efforts, but beyond that, Morrison has hosted annual fundraisers at the Julian Center, started a community service club, spearheaded University’s Year of Service, organized book drives, coat drives, blood drives, and more, has taught a class on leadership in service, has volunteered his time as a youth league soccer coach, has coached a Special Olympics basketball team, has given his time to the Timmy Foundation, and much, much more – all while performing the roles of husband, father, teacher, and coach.

That tireless commitment to service leads us to ask: What fuels Chris Morrison?

Finding What Fuels You

Chris Morrison didn’t set out with a life of service in mind, but it’s clear that his love of service runs deep. His parents were involved in school tutoring, were volunteers at local hospitals, coached sports, and assisted in many other community-based organizations.

Among those early experiences, sports in particular have played the most dramatic role in shaping Morrison’s understanding of the value of service. “Sports were huge in my family,” he says. “Playing sports, you get a sense of being part of something bigger than yourself. You realize that even if I’m not the center of the action, I can still help, I can still be a part of the success.” That understanding of selflessness in service of a larger cause is the thread that ties together all of Morrison’s endeavors, whether it be coaching, teaching, or volunteering.

“One of the hardest parts about community service is understanding that even a small part can be a big thing. I can’t solve world hunger, I can’t fix the homelessness problem in Indianapolis, but I can organize the closet at Holy Family Shelter so that when people come in they can pick out what they need and get on with more important things in their life. It’s easy to think you aren’t doing much, but you are. You’re making a difference.”

Freezin’ for a reason: The Polar Plunge is one of Morrison’s biggest fundraising efforts of the year.

One small act of selflessness for Chris Morrison comes during the yearly Polar Plunge, a fundraiser for the Indiana Special Olympics. During this iconic event, volunteers raise funds with the promise that they’ll take the plunge into Eagle Creek in the middle of January. Their motto? “Freezin’ for a reason.”

While “reasons” for doing good are endless, finding them can be challenging, especially for students who are still caught up in the dramatic process of growing into adulthood. At University, students have the opportunity to spend their most formative years around dedicated, engaged teachers who have done the hard work of finding their reasons, teachers who are willing and able to pass their passions on to others. That is a rare, invaluable experience. To celebrate and perpetuate that experience, we are sharing some of University’s most inspiring stories – the stories that fuel us – as part of our annual U Fund Campaign. If our stories inspire you as well, consider giving a gift to the U Fund before the campaign ends on June 30, 2019.

The virtues that led Chris Morrison to service – selflessness, perseverance, empathy – are now a part of University, and their effects have been wide-ranging. Morrison teaches a class on leadership, which strives to equip students with the tools they need to achieve their own service-based goals. The class also guides students’ natural interests to the volunteer opportunities that fuel their passions. Students looking for extracurricular opportunity can also participate in Morrison’s community service club, which leads many of the philanthropic initiatives that happen every week at University.

Stewardship, one of our six core values, has always been at the heart of University, but it’s now taking center stage during our Year of Service, led by Chris Morrison, which has provided every member of the University community a chance to grow in their capacity to do good. Some of the time we dedicate to our community meetings, assemblies, and, most importantly, Community Days has been set aside for the development of our understanding of service, both its purpose and the most effective strategies for carrying it out.

For this year’s fall Community Day, Chris Morrison leveraged the relationships he has developed with local charities and nonprofits to allow every student at University to dedicate their time to an organization. The freshman class worked at Gleaner’s Food Bank while sophomores and juniors volunteered in smaller groups at a variety of nonprofit agencies around Indianapolis. The senior class used their day to work on a beautification project in Carmel’s Central Park. The day culminated in a community meeting during which students and faculty reflected on what they had learned during their day of service.

One group’s reflection on their Community Day experience speaks volumes: “We learned how something as simple as making blankets can really have an impact on a family… It was a rewarding experience for us, we got to see something we made have a use and take pride in helping others.” The sense of selflessness and the critical value of small acts of kindness, two features that have come to define Chris Morrison’s career of service, were clearly both present on Community Day.

With all that and the countless other extracurricular projects Morrison has led, it’s impossible to say just how many University students have had their own service-oriented passions jump-started in one way or another by Morrison’s dedication. The contagiousness of a teacher’s passion is part of what defines University as a community.

“I Can’t Solve World Hunger, but I Can Organize a Closet”

Service is a high-minded ideal, but when asked what has kept him motivated throughout all these years of service, Morrison turned to a small moment of joy, a comical mutiny on the court. “I was coaching a Special Olympics basketball team,” he recalls, “and the ball went out of bounds. It was our ball. I gave it to Andrew, and I said, ‘Andrew throw the ball into Jim. Jim’s right there. Here’s the ball.’ Then Andrew grabs the ball, looks at me, smiles, and throws the ball to the other team. I just laughed. The joy and the fun those athletes get in playing is just outstanding.” 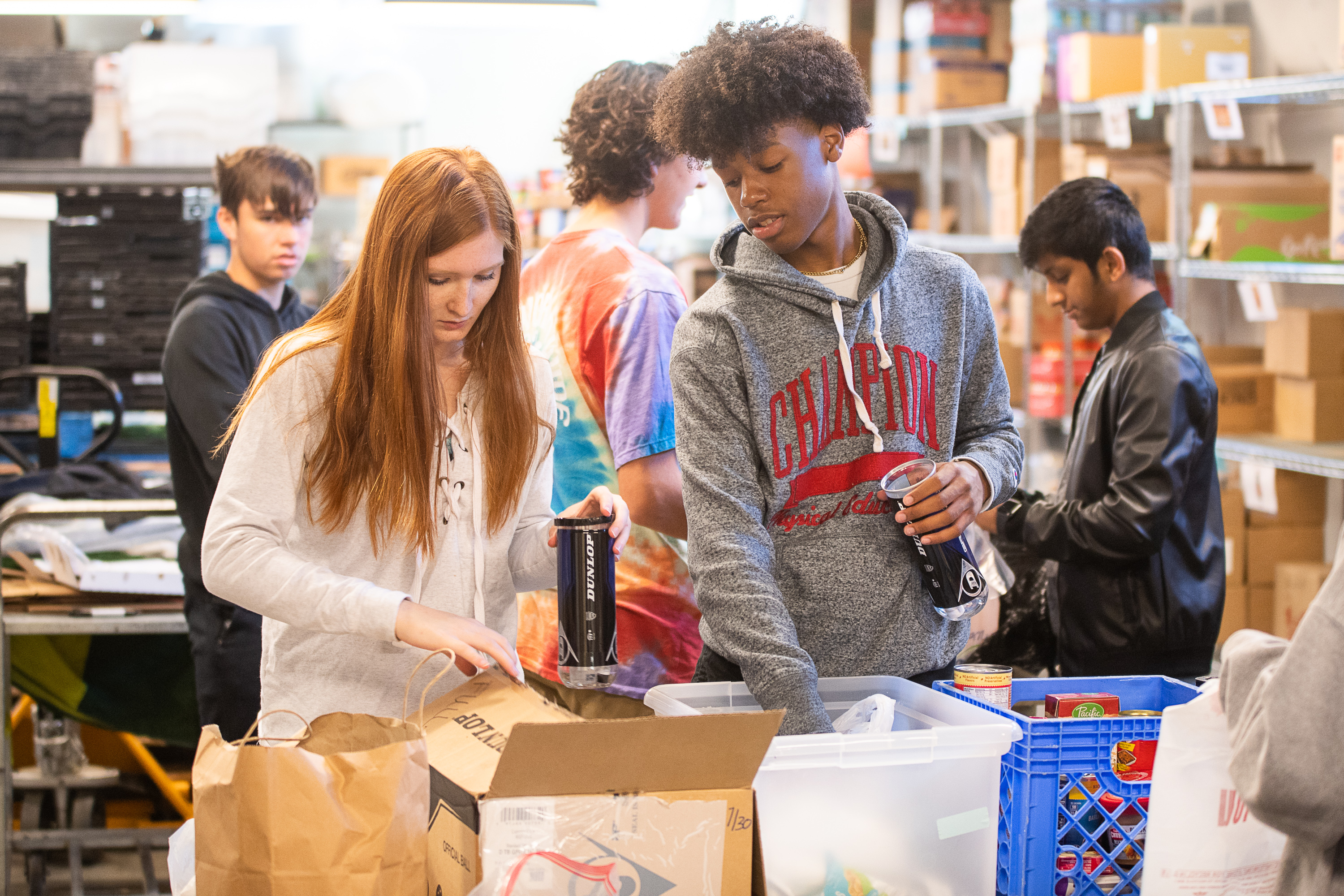 On Community Day, students have the chance to volunteer at a variety of local organizations.

Many consider service to be something done in addition to the day to day requirements of family and work, something done sparingly, only when the mood strikes. But Morrison sees things differently. For him, service is foundational, not supplemental. What this makes clear is that sometimes kindling a passion for service is more important than clocking service hours. The former can sustain a lifetime of service, as it did for Morrison, whereas the latter might quickly peter out, a helpful but singular event.

Speaking with Chris Morrison, it’s easy to lose sight of just how astounding, how tireless his commitment has been. But perhaps this is the secret to that perseverance – Chris Morrison, unlike many, doesn’t look at service as something that should be, in itself, tiring, something done only when the more fundamental requirements of daily life haven’t left us drained. Rather, service can be our fuel.

Of course, it can be tiring. “The hardest part is keeping up the momentum,” Morrison says. “I’ll work with one student who’s incredibly passionate about a service project, but then they’ll graduate, and there’s no succession. Or we’ll work together on an event and only three people will come, and they wonder if it’s worth doing again.”

But now, having fundamentally impacted the service community at University, Morrison can turn to that community for support. “When it gets hard for me, I know I can rely on the kids to step up.”

In challenging moments, Morrison always finds strength in the sense of the good he’s done and the joy that inspires both in him and in the people he’s helped. “It’s incredibly cliché, but with service, you get out of it what you put into it. There more you put into it, the better it is. I don’t have any doubt about that. You feel good about yourself, you help others, and you make the world a better place, even if it’s just a little better.”