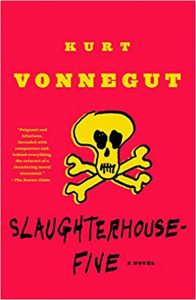 Kurt Vonnegut’s landmark anti-war novel Slaughterhouse-Five was released 50 years ago this past spring, and we will honor the work, and Vonnegut’s relationship to Indianapolis, by reading this as our 2019-20 summer reading book.

All students should come to school on August 12, 2019 having read this novel, as we will spend significant time in the first week discussing it and its themes. All students will also spend time working with this piece in their English classes during the first week of school.

Vonnegut was born in Indianapolis, attended IPS grade schools, and graduated from Shortridge High School. He served as an infantry man in World War II and was captured along with 50 of his fellow soldiers during the Battle of the Bulge. After being housed as a prisoner of war in an abandoned slaughterhouse, Vonnegut survived the February 1945 allied bombings of Dresden, Germany only to be tasked with cleaning bodies out of the wreckage, a duty he likened to a “terribly elaborate Easter-egg hunt.” Three months later, he made it to an American camp in France, returned to the U.S., and was eventually discharged and awarded the Purple Heart.

Vonnegut’s own journey bears great resemblance to that of his narrator, Billy Pilgrim, also a survivor of the Dresden bombings, who becomes a time traveler of sorts as both Billy and Vonnegut struggle to make sense of all they have seen. Studying this work together will provide avenues for us to consider the roles of fate and free will, the effects of trauma in our lives, the impact of Indianapolis natives, and the ways narratives help make sense of our world.

Some things to think about as you read:

If you have any questions regarding summer reading, please contact Alicia LaMagdeleine, assistant head of school, at alamagdeleine@universityhighschool.org or (317) 733-4475, ext. 132.