Inspired by one man’s call to “see them aliens,” tens of thousands of Americans will flock to Area 51 this month for what has evolved into a celebration of the extraterrestrial.

Students at University High School already had a close encounter with alien kind last month, thanks to the creative work of several students and teachers in the first week of school.

A New Vision for Seminar Days

Along with mainstays like the all-school ice cream social and freshman retreat, each school year at University High School begins with a series of Seminar Days. Seminar Days typically cover the more operational aspects of being a student – what rules to follow, what academic integrity means, etc. While the information presented is essential, students had begun to feel the days themselves were a bit lacking.

“I had always been on Freshman Retreat, so I never experienced Seminar Days,” said junior Ben Ewer. “But I heard from many people that they were strenuous.”

So the school empowered a group of students to reimagine them. A committee of students from Stewardship Council – which included Ewer, Rozembajgier, and junior Keegan Priest – dedicated a good amount of time last school year and this summer to this redesign.

The group kept the presentations on rules, college counseling, and alumni advice to Tuesday afternoon (once the freshmen headed to their retreat), and Wednesday morning featured several ULearn presentations by faculty members. For Friday afternoon’s activities, though, they let their creativity shine.

“We asked LaMags [Alicia LaMagdeleine] if we would be able to do a [school-themed] scavenger hunt in mentoring groups, and she said yes,” said Priest. “It was originally going to be a murder mystery, with people running around the school doing all of these crazy activities.” 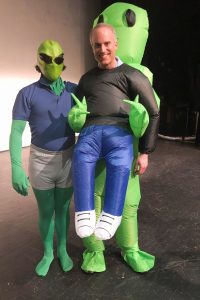 The students worried that the alien abduction of a teacher out of nowhere would seem too random. So they did a little extra work to plant some seeds. Over the summer, Priest made promotional posters for a new Alien Club founded by the alien-loving Tom FitzGibbon and hung them all over the school.

“Ben and I really wanted to get the lore in people’s minds,” said Priest. “We made the Alien Club posters, and Lade [Akande] – who didn’t know what was going on – posted a picture of them on her Instagram story. That got a bunch of people thinking Alien Club was an actual thing.”

So on Friday, August 16, the alien – Priest, dressed in an inflatable alien costume he bought on Amazon – emerged through a cloud of smoke to announce that he had discovered a threat in the University High School community and abducted FitzGibbon to keep him safe. He would return the teacher if and only if students could complete a series of tasks and decode the identity of the threat.

A Community Coming Together 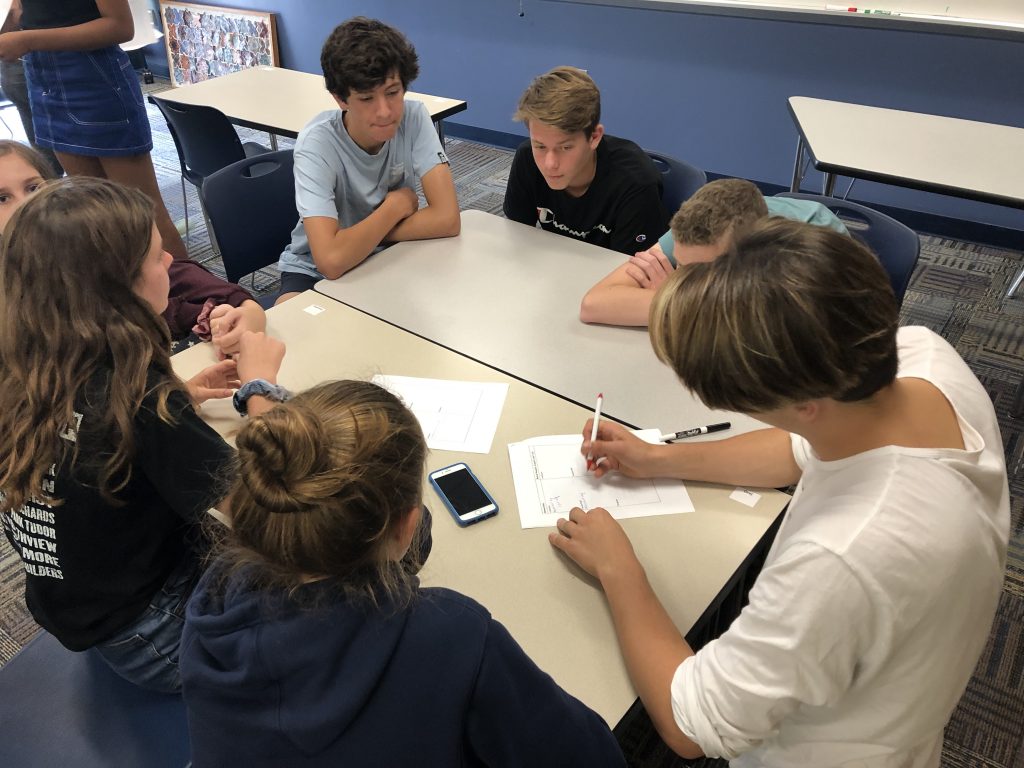 One group, led by senior Cordell Wilson, discusses the school’s core values and ways they are represented. This was one of several activities that earned the group a set of translated symbols.

Students participated in combined mentor groups, and challenges included identifying five things everyone in the group had in common, determining which faculty members had degrees from Indiana colleges, reviewing the student handbook, putting up (and taking down) a hammock, and singing the words to the school song loudly, as a group, in the Fairbanks lobby.

“The groups that were excited about it were obviously really excited about it,” said Priest. “They learned each other’s names, and they were able to go over our core values and know more about their faculty. And they did it in a way that wasn’t tedious and exhausting.”

As a reward for completing each task, teams received a set of translated symbols – the alien alphabet. At the end of the challenge, each team had a message written in this alphabet to decode.

“If they completed their assignments correctly, they got a translation,” explained Priest. The aliens had a language that we wrote up that was like, ‘Pizza equals X’ and things like that. Once a group got all 26 characters of the translation, we gave them a coded message to crack.”

The alien code translated into “Lareneg Rats Eno,” which is “One Star General” in reverse. University High School’s only One-Star General, Dave Vesper, was the source of the threat to FitzGibbon.

Once he was confronted by the students at the end-of-day assembly, Vesper spoke at length of his love for science fiction and space topics, and his anger at FitzGibbon leaving him out of the esteemed Alien Club. The Alien Club was disbanded for its lack of inclusion, and FitzGibbon was returned to the school unharmed.

Making Something from Nothing

University High School takes seriously the chance to empower students in their education, and giving students the opportunity and support to design a large-scale, all-school activity is just one example of this. The alien abduction activity was a fun and memorable way for students to learn about the school community and get to know their mentor groups a little better, and it’s something that can only work in a fun, flexible school community like University.

“It was really cool that this was a student-run thing,” said Rozembajgier. “It was our idea and then all the faculty just accepted it and were on board, which is awesome because you wouldn’t get that at another school.”

“It was super cool that Mary, Ben, and I we were able to just organize something like this,” added Priest. “This was obviously a good community-builder, and there were people that really, really cared about it. I think that says a lot about University that we’re able to just make something from nothing. Everyone in the school has to participate, and everyone has a lot of fun.”