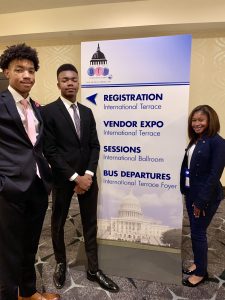 In September, three University High School students joined over 1,000 of their peers in Washington, D.C. for the 7th biennial On the Hill Legislative Summit hosted by Jack and Jill of America.

Noah Laramore, whose mother Aimee has been involved in the Circle City Chapter of Jack & Jill since its charter, holds a regional position in the organization this year.

“As regional vice president (of the Mid-Western Region, which is made up of chapters from Indiana, Illinois, Ohio, Missouri, Kentucky, Michigan, Wisconsin, and Minnesota), I’m in charge of regional programming,” said Laramore. “What falls under that umbrella is legislative and social activism. I’m in charge for our program year of making legislative events and initiatives that are carried out through the region.”

At the On The Hill summit, Laramore had a role in organizing the “The Time Is Now: Gun Violence Prevention and Safety Rally.” More than 1,000 students and their parents wore orange (the color for national gun violence awareness) and held a live stream of the rally as well as a social media conversation using hashtag #jjgoesorange.

Laramore hopes to continue advocacy on this issue and others throughout the rest of the year.

“I’m going to try to start a social media campaign to organize rallies in individual states once we get home [from On The Hill],” he said. “My overall goal for the year is to really talk about voting and getting students to understand that it’s not just for president. I want to help people understand what we can vote for and [emphasize] getting out the vote.”

For Laramore, a position related to advocacy was a perfect fit.

“I’m really interested in legislative action and social activism, so that’s the stuff I like to do and the stuff I care about,” he said.

Jack and Jill of America, Inc., is a membership organization of mothers with children ages 2 to 19, dedicated to nurturing future African American leaders by strengthening children through leadership development, volunteer service, philanthropic giving and civic duty.