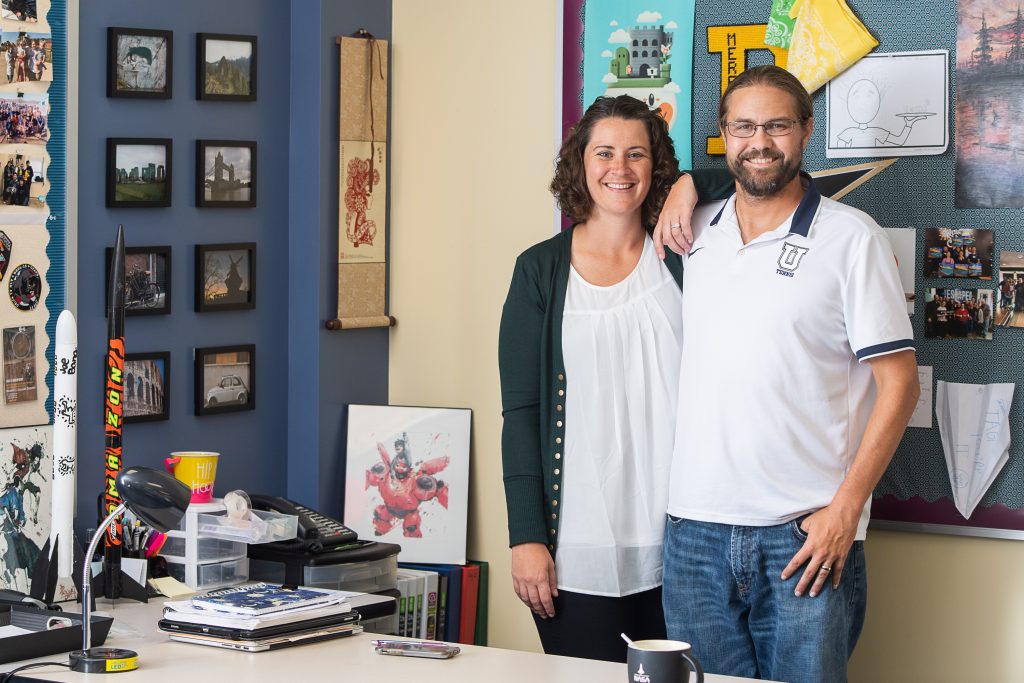 The wonders of space have enthralled Meredith Hogan for as long as she can remember. 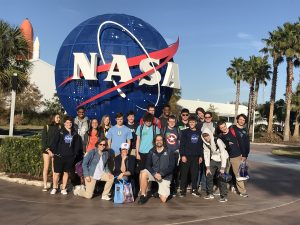 As a child, the University High School math instructor dreamed of being an astronaut. She chose Purdue University because that’s where astronauts go, and she studied astronautical and aeronautical engineering because it bridged her love of space with her innate desire to understand how things work. So on January 24, 2018, when Meredith Hogan got to visit the Kennedy Space Center on the same day as the static fire test of SpaceX’s groundbreaking Falcon Heavy rocket, it felt like a childhood dream come true.

What made the day even more special for Meredith, however, was that she got to share it with 18 University High School students. Meredith and her husband Brandon Hogan, a math and science instructor at University, taught a three-week course on space exploration and rocket science during January Term 2018. The culminating experience for the course exploring rocket science as well as the evolution and cultural ramifications of space exploration was this trip to Cape Canaveral, Florida.

“When I got the job at University, I realized this was a great opportunity to bring in rocketry, bring in some robotics, and just bring in some of the stuff that I love,” Meredith said.

Given their backgrounds in engineering and physics, Meredith and Brandon Hogan were uniquely suited to teach this particular January Term course. But they were also interested in the subject. Through opportunities like January Term, faculty and staff at University High School are encouraged to share their passions and their interests with students, creating rich and meaningful learning opportunities for both.

Empowering teachers to learn and grow alongside students is just one example of what the U Fund, University High School’s annual fund, supports each year. Gifts to the U Fund benefit not only the work Meredith and Brandon Hogan are doing with students, but also the work countless teachers are doing in and out of the classroom each day. This year, through the 2018-19 U Fund campaign season, we will share some of their stories with you. If they inspire you, as we hope they will, please consider giving a gift to the U Fund before June 30, 2019.

“SHE WAS HAPPIER DOING THAT THAN I’D EVER SEEN HER”

What few people would guess about Meredith and Brandon Hogan is that they never expected to be teachers.

When Meredith graduated from Purdue, she landed a job at what is now Northrop Grumman Corporation in California, a globally known aerospace and defense company – a dream job for someone with her degree. She worked as a systems engineer on several aerospace projects – though many remain classified, so she still can’t talk about them – until her primary project was dissolved in 2012.

It was what she had been doing outside of work, however, that informed her next career move.

“There were a few of us engineers who would go to local schools to tutor kids in math,” she explained. “The teachers would step aside and let us engineers come in and work with the students for an hour or so on their math work. The students would ask us whatever questions they had, and we’d go through it with them. So I’d been exposed to all of these teaching experiences before I was ever thinking about teaching.”

“She was happier doing that than I’d ever seen her during her career,” added Brandon.

So as she sat in her boss’s office that day in 2012, after learning she would be moved to a project she had little interest in, Meredith made a life-changing choice. She quit.

“It was a pretty gutsy move,” she admitted, “but I was really unhappy. I remember talking with Brandon’s dad, who kept saying, ‘If you’re not happy, just quit.’ That was such a foreign idea to me because this was supposed to be the job of a lifetime. It was a big deal to just walk away.”

A few months later, Meredith landed a substitute teaching job at The Buckley School, where Brandon was in his first year teaching science. This eventually led to a full-time teaching gig, which she held until moving to Indiana in 2015.

“What I’ve noticed over the years is that when I’m talking with students about a concept and I can say, ‘I used this in engineering at some point in my life,’ sometimes their faces brighten up,” Meredith said. “They like to see that there’s an application.”

BRANDON FINDS HIS PLACE IN THE CLASSROOM

While Brandon Hogan’s trajectory toward teaching was more linear than Meredith’s, it too had a few twists and turns.

“Initially [at Purdue] I had too many ideas of what I wanted to do,” Brandon explained. “I ultimately graduated with applied physics as my major, but I was planning to double major in physics and philosophy. I took a philosophy class and set the curve in there, but when I went up to the teacher and asked what my job opportunities would be, she said teaching was pretty much it. I dropped my philosophy major the next day.”

When he finished his bachelor’s degree, Brandon wasn’t quite sure what to do next. Purdue made him an offer he couldn’t refuse.

“At Purdue, they offered me free graduate school,” he said. “I would’ve been a fool to turn that down.”

So Brandon started working on his Ph.D. from Purdue University, also in applied physics. It took him seven years, and when he finished, he moved out to California, where Meredith was working for Northrop Grumman. By that point, he was more open to the idea of teaching, so he held some adjunct teaching positions at local colleges until he landed a job at The Buckley School, which changed the trajectory of his and Meredith’s lives.

“The Buckley School needed a physicist who could also do robotics, and they were very similar to University in terms of their teaching style,” Brandon said. “The headmaster who hired me actually reminds me a lot of Chuck [Webster]. He could walk into a room and immediately know if you’re a good teacher. And he ran the school really well.”

Brandon was in his first year at Buckley when Meredith left Northrop Grumman. He encouraged her to start substitute teaching there, and one year later, they were both working at Buckley as full-time teachers.

“We actually did the same thing at Buckley as we are doing here,” said Meredith. “We started bringing in programs that they didn’t have. They already had a Rocketry Club, but I brought in VEX Robotics, and then together we brought in FIRST Robotics.” 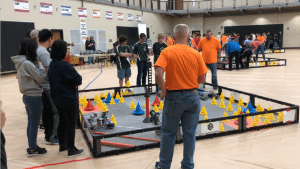 Robotics, like rocketry, was something Meredith and Brandon were uniquely suited to lead at Buckley. Meredith had competed in robotics when she was in high school, and then she and Brandon got involved as mentors for a local team while she was still working at Northrop Grumman. After they moved to Indiana in 2015, Brandon started a FIRST Robotics team at Whiteland High School and led the rookie team to the world championship. When Meredith started working at University in 2016, she brought in VEX Robotics.

“I introduced the idea for VEX Robotics at University two years ago, and Karen Wang stepped up as a leader right away,” Meredith said. “We went to several competitions in the first two years. We have a core group of students, and I think they’ve done really well.”

While University has only offered VEX Robotics in the past, this year Meredith and Brandon plan to start a FIRST Robotics team, which is a level up in intensity.

‘We’re talking about a robot that’s five feet tall and about 120 pounds,” explained Brandon. “It’s like a refrigerator that rolls around the school.”

“We have about 10 to 15 kids who are really buying into this,” added Meredith. “It’s a full commitment. We’ll put a bunch of raw material out there, and we’ll actually design something.”

One benefit for students is that they gain experience applying a real-world engineering process.

“Robotics involves the whole system engineering process,” explained Meredith. “So you say, ‘I propose that we do this,’ and then you do a bit more research. You work. You prototype. You give a presentation. You finetune your design. From there, you build your final product.”

Even though University is a relatively small school to be involved in a program like this, both Brandon and Meredith see the value for their students. It’s not only about building the robot; it’s also about managing the team and contributing whatever skills you have.

“It’s a really cool experience, but it’s really teaching students not only how to build these things and get them involved in this type of field, but it’s also about how to do outreach, how to network, how to communicate, how to run a business, and how to manage the finances — in addition to the mechanical engineering, electrical engineering, computer programming, etc.,” said Meredith.

And in some ways, the robotics team approach that encourages students to bring whatever interests and skills they have to the table mirrors what the Hogans have been able to do at University by sharing their backgrounds and interests with the students. For them, being at University feels like coming home.

“I love it here,” Brandon added. “I think we fit in really well.”